Things to Know About Ethiopia

Ethiopia, through its customs, heritage, history, and landscapes is extraordinary by definition. Often overlooked, we have found that this hidden gem is one of our favorite places to visit in the world. It comes as no surprise that other travelers have come to admire and love this country, too. Wild Frontiers began its trips to Ethiopia back in 2002 and our tours now seek to bring guests closer to the unique spirit that Ethiopia embodies. Over the years, we have learned more about its rich culture, amazing cuisine, decadent coffee, and other amazing facts.

We want to share some of that knowledge with you. Here are some facts and things to know about Ethiopia that may entice you to book a trip soon. This is one destination that you should put on your bucket list!

1. Ethiopia's national language is Amharic and has an interesting history.

Additionally, Amharic has 22 million first-language speakers and 4 million second-language speakers worldwide, of which about 21.6 million are from Ethiopia. It's the nationally recognized language of Ethiopia followed closely by English and Tigrinya.

2. Ethiopia is the only African nation that was not colonized by European colonial forces.

It was settled in 1886 and has a population of approximately 4 million. As one of the world's fastest-growing economies, it is a great destination for visitors from all over the world. The city itself offers everything from dancing, markets (the largest in Africa), art, amazing food and much more. Overall, there are wonderfully interesting facts about Ethiopia's capital city. Here are just a few more:

4. Ethiopia has a total population estimated at 80 million.

It is home to more than 80 ethnic groups and a wide diversity of languages. Religion plays a vital part in Ethiopian life. Almost half of the population identifies as Christian, or more specifically, with the Ethiopian Orthodox Church. The religion is as old as the country itself and much of the traditions are deeply rooted within Christianity, for example, the feast of the Epiphany also known as "Timkat" is one of the largest celebrations of the year. Other than Christian, Ethiopian's identify as Muslim or Jewish.

By way of Etiquette, it's customary to greet one another in a formal manner, usually by handshake and eye contact. Although, handshakes are much softer than Western cultures. Once relationships are developed, it's not unusual for members of the same sex to kiss each other on the cheek as an informal greeting. Personal relationships are developed and acknowledged before business. Furthermore, it's not unusual to see children and younger generations bow to their elders out of respect.

Lastly, Ethiopia's population is extremely varied and placed in different regions of the country. In fact, more than 80% of the population lives in rural areas. One of the most notable is Danakil Depression, one of the hottest places on Earth with temperatures exceeding 125F (51C). A tribe by the name of Afar live in this area. Other tribes from around the region each practice different customs and unique styles of living.

5. Ethiopia follows its own calendar system, most closely related to the Julian calendar.

Ethiopia's calendar is comprised of 12 months of thirty days each and a thirteenth month of five days (or six days in a leap year). A leap year is always recognized every four years without exception. The most notable difference in Ethiopia's time tracking, amazing, is that their calendar is seven years and eight months behind the Western (Gregorian) calendar. The main cause of this disparity is the way these cultures calculate the birth of Jesus. Effectively, Ethiopia is in the year 2012 while the rest of the world is reflecting on 2019.

Many tourists find the calendar that Ethiopia recognizes perplexing. However, as Ethiopia embraces internationalism, they do recognize the world's Gregorian calendar, year, days and even clock times. Yes, Ethiopians tell time much differently than most of the world. For now, we'll just note that it's usually not an issue even if you seek to travel to this amazing area.

6. Traditionally, parents and children do not share a last name.

Most children take their father's first name as their last name. Ethiopian's usually refer to one another using first name only

7. Ethiopia is the only African country with its own alphabet, letters, and numbers that traces its origin back to Sabean.

Also known as Ethiopic or Geez, the alphabet is one of the oldest in the world. It has a phonetic syllabary, meaning spelling errors are not common — unlike Latin based alphabets. The Ethiopian Alphabet consists of thirty-three letters and seven vowels.

8. Ethiopia claims to be the final resting place of The Ark Of The Covenant.

Eat your heart out, Indiana Jones — it's not Egypt. As a refresher, in Christian belief, the Bible notes that Moses inscribed the Ten Commandments onto stone slabs, which were then placed into a box made of acacia wood, aka the Ark. Ethiopian lore says that this box now resides in a church in Axum, Ethiopia's highland area. Jewish tradition says that the Ark was lost when the Babylonians sacked King Solomon's temple around 4th Century B.C. However, Ethiopian Christians claim that the Ark was taken to Ethiopia for safekeeping.

The church in Aksum is guarded by a single monk and outside visitors are not allowed inside. Whether or not people believe the Ark of the Covenant to be real, much less safely tucked inside a monastery in Ethiopia largely depends on religious beliefs. Regardless, the magic of tradition and the deeply seeded spirituality of Christianity is very much present in Aksum as well as the area surrounding it. It is truly a wonderful, mythical place to visit.

9. The Queen of Sheba once ruled over Ethiopia.

The Queen of Sheba is a biblical tale of a monarch said to have ruled over the kingdom of Sheba, also referred to as Saba in Arabia. During the same time, King Solomon was given gifts from God and he became the divine King of Israel and Jerusalem. Soon after, legend held that the Queen of Sheba made her journey to meet the divine king and bestow him the wealth and gifts of her own monarch. The fascinating tale is documented in the Bible King I and Chronicles II. Although there is no refutable proof, there are traces of Yemeni architecture to be found in the country.

10. Ethiopia is the second oldest Christian country in the world.

We've provided various tales and lore of Ethiopia's deeply held religious beliefs. Ethiopia has a long, detailed, fascinating history and that history is definitively connected to Biblical and religious traditions. Much of the customs in this country stem from Christianity and certain rural areas take divinity to be one of the sole reasons that the country continues to thrive and prosper. Only one area is said to be the oldest Christian country, even older than Ethiopia, and that is Armenia.

Its magical benefits were founded around 850 AD. Legend holds that Kaldi first became aware of a magical berry that, when consumed by his goats, made them so energetic they did not want to sleep at night. Kaldi reported the findings to the local abbot of a nearby monastery who then made a drink with this crop. He found that it kept him awake longer through evening prayer.

Of course, there's no verifiable evidence of the origins of coffee, but it's safe to say that Ethiopia has some of the best coffee in the world. Given that Ethiopia is one of the largest distributors of coffee, it's no wonder that the majority of the Ethiopian economy stems from agriculture. The flavors of Ethiopian coffees are mostly bright fruits, florals, and they're light aromas. Half of the coffee produced in Ethiopia is for domestic consumption. There's also a long cultural tradition that important life events are opened with a "coffee ceremony."

The clock is tracked from dusk to dawn, and dawn to dusk. An easier way to describe this, is they track time according to daylight. So, at 7 am when the sun rises, Ethiopia's time reads 1 o'clock. Similarly, noon would correspond with 6 o'clock, or 6 hours after the sun has risen. Foreigners are often confused about this big difference, but there are areas of Ethiopia that use a standard 24-hour clock, as well. In any of the case, it's only a matter of time before visitors grow accustomed to this daily tracking.

The volcano itself resides in Danakil Depression, a remote region that's one of the driest, lowest, hottest places on Earth. It is also one of the most active volcanoes in the world. Occasionally, due to pressure, "fountains of lava," will form and fly 6- to 13-feet high. The last known eruption of this volcano was recorded in 2005.

Check Out Our Ethiopia Tours and Holidays 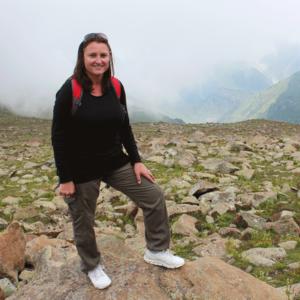