The 18 Best Places To Visit in Sri Lanka

This island in the Indian Ocean was once described as the finest island in the world by Marco Polo. For many visiting Sri Lanka is a bucket list trip, with its glorious tropical climate, some of the best beaches in the world, incredible local cuisine and inspiring culture.

Adam's Peak gives amazing views out to Colombo and across to the sea, most impressive at dawn after a night-time walk along the illuminated path. Having been a pilgrimage site for different religions over 1000 years, it is now the namesake of Adam due to the Christians' belief that the footprint at the summit of the mountain was left by him. Buddhists believe that the footprint was left by Buddha on his third and final visit to Sri Lanka.

For the Hindus the mountain is known as Sivanadi Padham due to the creative dance of Siva, which left the print. Muslims have it that the foot impression resulted from Adam standing on one foot for a thousand years of penance.

A UNESCO setting that once served as the capital of an ancient Sri Lanka, Anuradhapura has long been sacred to the Buddhist faith. Surrounded by monasteries and temples and home to the Sri Maha Bodhiya, believed to be the oldest tree in the world, the site once ranked alongside Nineveh and Babylon in size and importance.

Aside from the ancient and sacred Bodhi tree (reputed to have been grown from a cutting off the original Buddhist ‘Tree of Enlightenment), the site also boasts 8 major palaces and the remains of some of the most complex irrigation systems ever built in the ancient world.

What may be called one of the wonders of the world is the tall, standing statue of the Buddha at Aukana, another architectural marvel of the ancient Sinhalese. The rock cut statue which stands 39 feet above its decorated lotus plinth and 10 feet across the shoulders, belongs to the period of King Dhatusena (459-477 AD), the builder of the great reservoir Kalawewa.

It has been very well preserved over the years and is a joy for anyone to see and appreciate. It is a unique creation by an unknown sculptor.

Known in the 1920's as the Garden City of The East, Colombo has been used as a port since in the 8th Century. Today it is a city of contrasts, mixing historical monuments, temples and churches with modern hotels and trendy restaurants. Tree lined boulevards rub shoulders with gleaming new shopping centres and bustling street markets making for an eclectic, fascinating melting pot in this ancient port city that never disappoints.

Galle Fort is a UNESCO World Heritage site that is the best preserved colonial sea fortress in all of Asia. The oldest parts date to the 1650's, though it is believed by some scholars to be Tarshish of the Old Testament.

The fort itself passed through the hands of the Portuguese, Dutch and then the British and shows architectural influences from all three as well as much later art deco and art nouveau. In the late afternoon the fort begins to slip into a centuries old lethargy and the visitor can almost feel the ghosts of soldiers, sailors and merchants who lived here over the hundreds of years emerge from the brick work.

Visiting this historical city in Sri Lanka's north it is impossible to escape its conflict-ridden history. A power base of the Jaffna Kingdom between the 13th and 17th centuries, it was made a colonial port town by the Portuguese in 1619, passing through Dutch and British control before becoming a site of decades of conflict in Sri Lanka's civil war following its independence.

Things are changing in Jaffa: the newly built Sangupiddy Bridge now connects the Jaffna Peninsula with the mainland while 2014 saw a celebratory reopening of the â€œQueen of Jaffnaâ€ railway route connecting it to the capital Colombo. This remerging city, a world away from Sri Lanka's south, is the place to discover Tamil's creative culture, in solitude from other tourists.

Located on the tip of a western peninsula some 150 kilometres north of the capital, Colombo, Kalpitya lies sandwiched between the waters of the Puttalam Lagoon and the marine delights of the Indian Ocean. Refreshingly unspoilt by mass tourism, the area is home to colonial Dutch architecture, deserted sand dunes and the largest coral reef in Sri Lanka.

Just an hour’s boat ride from Kalpitya, the Bar Reef is a maritime sanctuary for manta rays, reef sharks, turtles and a myriad of tropical fish, whilst the nearby lagoon and river provide the ideal spots to explore by canoe.

Lying in the mountains, at an altitude of 500 m over the sea level, Kandy was the capital of the last generation of Sri Lanka`s kings until it fell into the hands of British in 1815. However, this delightful old highland town is known more for its cultural and spiritual importance rather than its history, and Buddhists from all over the world come specifically to visit the Temple of the Tooth, the Dalada Maligawa.

Kandy is a must on our places to visit in Sri Lanka. When visiting, make sure you take a train journey to Ella, it is one of the most memorable train journeys in the world. Find out more here >

The Kelani River provides access to some of the most exhilarating white water rafting in Sri Lanka. Flowing through a landscape of wild rocky gorges, the river provides some dramatic adrenaline fuelled fun for experts and beginners alike.

Situated just two hours by road from Colombo, the river’s grade II & III rapids pass through stunning jungles backdrops that were used as locations for the ‘Bridge over the River Kwai’, David Lean’s classic war movie. The best time to raft the river is between May and December and most trips will also include lunch and a chance to swim.

Located at the mouth of the Negombo Lagoon, some 40 kilometres to the north of Colombo, the resort town of Negombo offers visitors some of the finest beaches on Sri Lanka’s west coast.

Originally colonised by the Dutch, the English and the Portuguese, the town is home to the second largest fish market in the country and some lovely old colonial architecture. Its reefs also provide access to some of the best diving in the country, whilst the nearby protected marshlands of Muthurajawela are home to over 190 species of wildlife.

Set in the heart of the tea-country, this beautiful town is where the British succeeded in creating an English countryside, with homes in styles from Georgian to Queen Anne. Well-kept lawns with hedges, an Anglican church, a famous golf course and beautiful parks give the place an air of nostalgia. Situated 1,890 meters above sea level, the air is cool and fresh - a serene retreat from the hustle and bustle of Colombo.

Polonnaruwa was the second capital of Sri Lanka after the destruction of Anuradhapura in 993 and reached its height of glory in the 12th century. Blending South Indian Hindu culture with Sinhala artistry, today we can still find many interesting and spectacular buildings and monuments in this ancient World Heritage City.

The ancient rock fortress of Sigiriya (Lion’s Rock) stands on top of a granite plug some 370 metres above the surrounding jungle. Built by King Kashyapa back in the 5th century AD, the fortress was declared a UNESCO World Heritage Site in 1982.

One of the country’s major attractions, the route up to the citadel passes the famous frescoes of the ‘Sigiriya Damsels’, a unique set of paintings that once covered an area of the rock that measured some 140 metres long by 40 metres high. From the summit, the remains of the palace overlook some truly breathtaking views of the surrounding countryside.

No prizes for guessing what they look like. The range has been declared a conservation area, and is now known as the Knuckle National Heritage and Wilderness Area. It encompasses 155 sq km and five major forest formations and is host to a wide variety of rare and endemic flora and fauna. The mountain scenery is spectacular.

It is a natural paradise with its crystal waterfalls; verdant tea plantations and local village gardens - a wonderful spot to explore on foot.

An important habitat for water birds, lying 165 kilometres south of the capital, Udawalawe National Park covers nearly 31,00 hectares of land on the boundary of Sri Lanka’s wet and dry zones.

Created to provide a refuge for animals displaced by the construction of the Udawalawe Reservoir, the park is one of the county’s most popular attractions, offering a chance to view Sri Lankan elephants, mugger crocodiles and Bengal monitors in the wild, as well as a vast array of endemic birds, rare migrants and an impressive selection of birds of prey.

Situated only 50km from the ancient capital of Anuradhapura, Wilpattu National Park is a pocket of dry zone forest extending out to the west coast of Northern Sri Lanka. The park is home to over 40 natural lakes, or villus, providing it with its name '˜the land of the villus'.

The Kali Villu is associated with the legend of Queen Kuveni, who utilised the lake during her reign 3,000 years ago. Kuveni's children are believed to be the ancestors of the Veddas, Sri Lanka's aboriginal population. At over 1300km, Wilpattu is famed for being Sri Lanka's largest National Park and provides refuge for leopard, Asian elephant, crocodile, sloth bear, barking deer, grey langur monkey, peafowl, mongoose, jackal and many birds.

Yala West (Ruhuna) National Park is recognised to be one of the best parks in the world to observe leopards. The park covers an area of over 100,000 hectares and is divided into five blocks. Yala West consists of scrub jungle, brackish lagoons and stunning rock monoliths scattered throughout the park, its eastern edge is bounded by the South East coast. The drier season falls between May and August and the park closes for a short time during September and October. 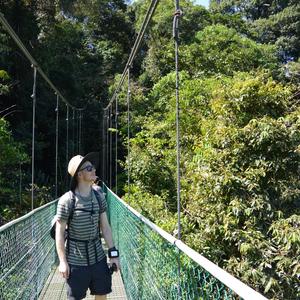