A guide to visiting Petra

Driving up through rugged desert canyons and the winding mountain roads of the King’s Highway, you emerge suddenly at the top of a high peak and find yourself surrounded by the bustling village of Wadi Musa, the town that has literally grown up around the booming tourism business of Petra.

Located about a 3 hour drive south of Amman, and appearing on numerous top-travel destinations lists, top ten places to see in your lifetime, and lists of the new seven-wonders of the world, Petra, declared a UNESCO World Heritage Site in 1985, is surprisingly easy to get to and affordable to visit.

Known as the Red Rose capital city and a once prosperous trading centre of the Nabatean empire that, prior to being conquered by the Romans, stretched from the Euphrates to the Red Sea, Petra is steeped in historical lore, Arabian romanticism, ancient beauty and is without doubt one the Middle East’s most spectacular, unmissable sights.

With the site covering over 60km, Petra can seem an overwhelming task to undertake at first, however, once you know a few quick tips and secrets, you’ll find the exploration not only easier than you thought, but exciting, affordable, and fascinating as well!

1. Go in the early Spring or late Autumn

Jordan can get hot, very hot, and Petra can be relentless in the sun during summer months. In the dead of Winter, Petra can be rather cold, rainy, windy and snowy. Most travelers flock to the site during the near-perfect weather of the Spring and Fall. However, the shoulder dates of these times will avoid the largest of the crowds while still maximizing your chances for fantastic weather.

Early March and late November are the best time to visit to avoid the biggest crowds, but weather-wise anytime from March to May and September to November is great.

2. Go early in the morning and/or stay till closing time

Arriving as soon the gates open at 6am or leaving as the gates are closing at 6pm are your best times to grab those spectacular photos with no one around, and really avoid the rush of tourists that bus in mid-day.

I recently stuck around right until closing time and got that spectacular shot of me in front of the Treasury building with no one else in it, AND the famous picture of the Treasury peeking out from the Siq, again, with no one around! Not only do you feel like you have the place to yourself, but the lighting is perfect at sunrise and sunset to get amazing shots!

In a word – no. I’ve been to several spectacular sites around the world, but Petra is so amazing and unique, I recommend a minimum of two full days to visit the site and explore the surrounding area. Make sure you have a free night to visit Petra by Night, which only runs Monday, Wednesday and Thursday evenings, in which you hike after dark through the Siq to the Treasury building lit up by hundreds of candles!

A one-day ticket to Petra is 50.00 JD, a two-day is 55.00 JD and a three-day ticket is 60.00 JD. It makes a lot of sense to stay in Petra for days 2 and/or 3. Tickets can be purchased by cash or credit card at the Visitors Centre and a valid passport/ID is required.

Absolutely! The site is so large, with so many hidden trails, nooks and crannies, it would be very easy to overlook something you really wish you had seen! The site was run and inhabited by numerous governments and cultures over the millenniums and their influences are still visible today.

Local guides are highly trained and knowledgeable, licensed by the Jordanian Government, speak perfect English and are very easy and fun to spend a day with. Don’t try to read a guidebook while climbing cliffs and admiring spectacular tombs craved into sheer-faced walls.

You likely spent a good bit of money on airfare and accommodations to come all this way to see the site, spend the few extra bucks to maximize your experience and time there, as well as support the local Bedouin economy. Guides range in cost from 50.00 JD to 100.00 JD for the day.

5. Is it expensive to get there?

Jordan is still what I would describe as an affordable destination for the Middle East. You have your Dubai’s, and Saudi Arabia is now on the higher financial end as well, but Jordan can be done in either a private, tailor-made tour such as our Classic Jordan Trip or our 10-day Group tour Jordan: Lost City of Arabia for under 3K per person!

Little Petra, Petra through the back-door hike, and the oldest bar in the world are just some ideas for your extra day after visiting the main site of Petra. Start in the morning with a visit to Little Petra. Smaller and a much-less visited site than main Petra, Little Petra does not disappoint for an hour or two in the morning! The highlight is a cave, known as the Painted Biclinium, that has beautiful Nebatean frescoes painted on the inside and is visible to visitors still today!

Little Petra, Petra through the back-door hike, and the oldest bar in the world are just some ideas for your extra day after visiting the main site of Petra. Start in the morning with a visit to Little Petra. Smaller and a much-less visited site than main Petra, Little Petra does not disappoint for an hour or two in the morning! The highlight is a cave, known as the Painted Biclinium, that has beautiful Nebatean frescos painted on the inside and is visible to visitors still today.

7. Arrange a tailor-made tour of Jordan to maximize your time and enjoyment

Wild Frontiers can arrange a tailor-made private tour of Jordan for you, so you can utilize our expertise instead of spending months researching the how, when, why and what of travelling to the Middle East. We can also add in Egypt, Israel, Saudi Arabia, Oman or Lebanon combined with a week in Jordan to make the most of your time overseas.

Utilizing our 20+ years of expertise allows you to relax and know you are seeing the best of the best your destination has to offer, and often we can arrange it in very unique ways that increase your cultural involvement while decreasing your exposure to crowds. The other great thing is you get a private car/driver and tour guide throughout your trip, which is fully customizable to suit your needs, plans and wishes!

Check out our Jordan tours here 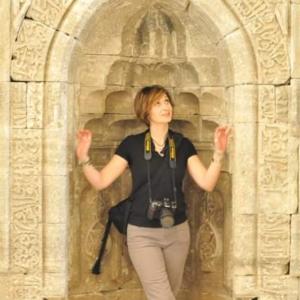