A feat of nature: The Danakil Depression

Tour leader Dario describes his favourite place in Ethiopia, the mighty geological spectacle in the Afar Region, which resulted from the presence of three tectonic plates in the Horn of Africa.

The Danakil Depression, also known as the hottest place on earth, is one of the most tectonically active areas on the planet. Most of the Danakil lies below sea level with the lowest point reaching 120 meters. Roughly one-quarter of Africa's volcanoes are found in this area, with Ertale considered to be the most active and containing one of five lava lakes in the world!

The Danakil Depression has always been my favourite part of Ethiopia. The energy of the Ertale volcano which has hosted a permanent lava lake for over 130 years; the desolate, colourful Dallol with its sulphur geysers and pools and the camel caravans, a salt extraction tradition which has been linking the Muslim Afar lowlands with the Tigrain Christian highlands for thousands of years.

However, what fascinates me the most is its unpredictability and the fact you always see change, whether in the level of the lava, the amount of sulphur in Dallol or even new acid wells which have sprung up in the last few years.

For the past 18 months or so the level of the lava was about 5 to 10 meters below the inner crater. In December 2015, it had risen to 2 meters below the inner rim. Then finally last month, it overflowed. You couldn’t approach, but as soon as it was accessible I headed up and took this picture, the dark lava pictured is the fresh part.

View our holidays to Ethiopia here or find out about trekking the Danakil on a fundraser for the Foundation here. 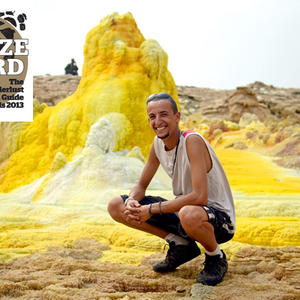