Six years on their scars may have healed, but the screams of the newly initiated boys still haunt me.

Witnessing the ceremonial carving of young, fresh skin with razor sharp bamboo is a memory for life. Black skin, pink flesh and scarlet blood; a real-life horror show.  Papua New Guinea is not for the fainthearted.

This August I found myself back on the Sepik River, in the spirit house at Yen Jen village, where I had witnessed that brutal initiation.  Some of those boys were there again, relaxed, sitting around smoking hand rolled cigarettes.  Their bodies are now adorned with impressive crocodile skin-like markings. They are men now; having been gifted the secrets of manhood by their elders.

Despite the missionaries’ best efforts, for a small cluster of villages in the Middle Sepik it’s the crocodile, not the cross, that is worshipped in the Haus Tambarams, Spirit Houses.  Tribal art decorates the dark interiors – skilful carvings, eerie masks and towering ancestor figures.   Inside these tall wood and thatch structures, prehistoric beasts are respected, worshiped and feared.

Inside the spirit house I was invited to sit on the long wooden benches, beneath hanging crocodile skulls and skins, by bare-chested village elders.  Around their necks hung impressive adornments of shells and crocodile teeth.  A small fire crackled on the dirt floor, the emanating light highlighted sweat trickling around the fading skin carvings on the elder’s chests.

The chief explained, in pidgin English, his tribe’s creation story of how a girl had been carried into the river by the crocodile and later gave birth to the crocodile people.   Other legends tell of men living with crocodiles to learn the secrets of their power.

Juxtaposed among these legends, technology had somehow synched my pictures from that initiation day six years previously.  Sitting beside the biig man, village chief, I flicked through the photos on my phone.  He chuckled as he recalled the ceremony vividly, seemingly oblivious to the boys suffering.

Today, the scene was one of tranquillity as the fierce tangerine sun started to dip beyond the Sepik River.  The garamut drum, skilfully hollowed from a tree trunk, was struck several times, the sound reverberating hypnotically beside the river.  The sun was now low enough to entice the crocodile spirit from the river; it was time for the ceremonial dance.

From the Spirit house, human representations of salt and fresh water crocodiles led a rhythmic procession of grass skirted villagers. Their faces and limbs had been painted, and they shook their spears in time with the drum beat.  An impressive array of shells, feathers and bones decorated their bodies.  A small fire was lit around the crocodiles. The chief explained that this signified conflict - something never far away in the most ethnically diverse place on the planet.

The Sepik River is the artery of this region, moving goods, people and news from one place to another in this remote jungle.  Exploring the Sepik is like venturing into a lost world.  A world of towering spirit houses, tribal art and ceremonial dances.  It's a hazardous four-hour drive from the coastal town of Wewak to Pagwi, an uninviting river station of fuel cans, a small store and the ubiquitous South Pacific Beer shop. Beyond here the absence of a phone signal means news is still passed along the river between villages as it has been done for centuries.

Before we left the Sepik news had arrived that a newly initiated boy had fallen sick and died in a spirit house.  The crocodile spirits of the Sepik had claimed another soul.

Meet The Crocodile Men Yourself 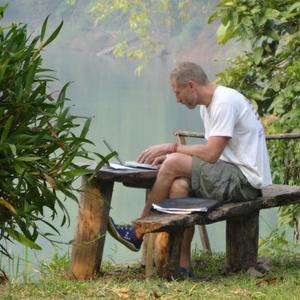