Standing in a sea of snow and ice. There are 1312 ever-changing islands in the Luleå archipelago and the only way to access many of them in winter is via Snowmobile or Hovercraft!

Standing out on the ice was truly amazing – incredibly quiet, really beautiful and SO cold. The Hovercraft can be booked from Brandon Lodge in Northern Sweden, which is a fantastic lodge to begin your Swedish Arctic circle adventure and one that should not be missed!

Coffee cheese. Hear me out…

This traditional Sami way of drinking coffee really surprised me. When the Sami herders were out with their reindeers in the frozen wilderness, rather than carrying milk, they carried cheese to put into their coffee.

The cheese they use is similar to Halloumi (and is actually called Finnish Squeaky Cheese), so doesn't really melt, but it does cool the coffee down to a perfect drinking temperature. It kind of reminded me of tiramisu…

I stayed in some fantastic accommodation during my trip. To name a few – the famous Treehotel, the traditional Sapmi Nature Camp and the wild Aurora Safari Camp.

Perhaps not my favourite, but definitely the most memorable was the Ice Hotel, located 200km north of the Arctic Circle. Half of the Ice Hotel is melted down after every winter and then rebuilt for the following season.

The other half (ICEHOTEL 365) is a fully permanent structure powered by solar panels, which keep the temperature between -5 and 8 degrees all year round.

If the prospect of a chilly night does not appeal, then there are deluxe rooms which have a heated bathroom & sauna… however, I had a great nights sleep on the ice and besides, it IS a once in a lifetime experience!

Where to begin. Husky rides, snowmobiling, ice fishing, a hovercraft. There really is so much to do and see in northern Sweden.

I thoroughly enjoyed the Mushing, however. Once the pack coalesces, there is little that stops them from reaching their destination at full pelt.

All tours in the region offer husky safaris, and before heading out into the snow you will be trained on controlling the sledge and the dogs. I wonder if I can get a team of dogs together for my commute…

Genuinely too many to choose from…however...

Something that was completely unexpected and rather amazing was finding one of the Game of Thrones Iron Thrones up in the mountains of northern Sweden, at Björkliden.

In what can only be described as the most fantastic marketing idea, HBO (the makers of Game of Thrones) secretly placed six replica Iron Thrones around the world, in similar locations to the show. They then released teaser videos of each Throne and where it may be hidden, which then started the most incredible scavenger hunt.

One of these thrones was hidden in the wilderness of Björkliden with the backdrop of the stunning Lapponian Gate. Unfortunately, I was not the first to find the throne, however, it was truly wonderful stumbling across this (uncomfortable) seat buried in the snow.

King of the North and all that… 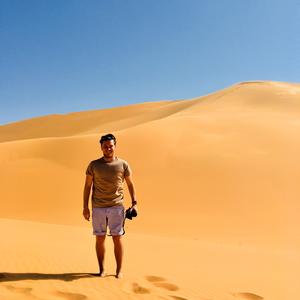 Jurassic Park - except monkeys, not dinosaurs... Just back from...Ethiopia Planes, Trains and Snowmobiles - Getting Around Sweden
Share this post: