Finding the Secret of Eternal Youth in Peru

The search for eternal youth as led mankind down many distant paths and has become the stuff of legend for many cultures throughout history. Those who have hiked the timeless Inca Trail to Machu Picchu in Peru have, for the most part, walked right by the true secret to eternal youth…

Tired from a long day of hiking and looking forward to the next day’s arrival at one of the world’s greatest manmade wonders, it’s easy to understand why most hikers miss it. But as the alternative one-day El Camino Real trek to Machu Picchu has been growing in popularity, hikers who choose this option have also been discovering the Inca Empire’s answer to man’s quest for eternal youth - Wiñay Wayna.

Hikers on the El Camino Real trek begin at the bottom of a river canyon and spend an average of 5-7 hours reaching Machu Picchu, depending on the pace of the group. Along the way, the route passes right through the Inca site of Wiñay Wayna, or properly in Quechua, Huiñay Huayna. Both translate to “forever young” in English.

How many visitors have stumbled upon this site and either ignored its name for the tricky pronunciation or (for those that bothered to translate it to their native tongue) puzzled at its true meaning?

As in all Inca archaeological sites, evidence of brilliant hydrologic engineering is present. Perhaps the site was named “forever young” for some secret freshwater spring? Could the Inca royalty have hidden some specific religious devices, a clue that finally reveals the answer to the ageless quest?

When I hiked up the El Camino Real and arrived to Wiñay Wayna I was tired. “Feeling my age” some might call it. Now dominated by “millennials” – the paradoxically thousand-year label for today’s young people – how could Wiñay Wayna reveal “forever young” to this aging hiker? The answer to this Inca riddle was so simple no child could miss it.

Sitting in Wiñay Wayna there is no foreground. Staring out into the endless maze of Andean mountains one is visually thrust off Wiñay Wayna… You are psychologically forced to fly.

I scan the site for a fellow hiker who I knew suffered from vertigo and located him far off in the distance, leaning heavily uphill and hugging a wall, the sensation of Wiñay Wayna was unbearable for him.

Returning my gaze to the view, a flood of childhood dreams came rushing back to me. I soared through the Andes. My flight led me further and further into the mountain ranges. Piercing the clouds, I rushed forward in sustained flight; no condor my superior.

It was at once clear, the secret to being forever young was no physical trick or potion but a mental adjustment.

As children, we gaze up to the sky in wonder and study the clouds. But then life’s journey instructs us to look down: to read, to study, to work. “Keeping your head down” is an expression of hard work, of a path towards progress and efficiently getting things done.

Wiñay Wayna is an ancient Inca slap in the face. A clear message. The fountain of youth is a child’s wonderment - keeping your head to the sky.

Check Out Our Peru Tours Here 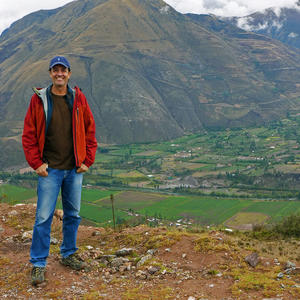 Where was Roma Filmed? How to avoid the crowds while visiting Costa Rica Taking the Long View at the Lost Canyon Nature Reserve
Share this post: