Wild Frontier Operations Manager Fran recently visited the Pink Rickshaw Company in Jaipur, to find out how the project we are delighted to support is getting on.

On my recent trip to India, I was fortunate enough to join the Pink City Rickshaw Company for a morning ride around the city of Jaipur. This wonderfully quaint trip is now included in many of Wild Frontiers tours that visit Jaipur and well worth the early start.

The Pink City Rickshaw Company is a not-for-profit initiative that provides innovative employment opportunities for women from low-income households in Jaipur. The women are trained to drive electric rickshaws around the city and guide tourists to some less-visited parts of the city - areas that tourists would not usually get the chance to see.

Jaipur is the capital of the Indian state of Rajasthan, the usually busy and noisy city but is cooler and quieter in the morning before the daily rush ensues.

Waking early, our group head out to the Albert Hall Museum, which serves as the museum for the state of Rajasthan. As the meeting point for our pick-up, we waited for our drivers and were entertained by young couples running through the swaths of pigeons that reside by the museum for photographs as part of their wedding celebrations. The 130-year-old building is a popular backdrop for these photoshoots and a common sight in the morning our guide tells us.

The Albert Hall Museum sits on a large roundabout and as we admire the view in the morning light suddenly a spec of bright pink grabs our attention. A pink rickshaw whizzes around the roundabout and pulls over to greet us, followed by another, then another. The train of bright pink rickshaws parking up is quite a sight and even some the locals busy with their morning exercise in the park are intrigued.

Jaipur is known as the ‘pink city’ owing to the fact many of the buildings in the old town are pink, or rather terracotta, in colour.  In India, the colour pink is considered the colour of welcoming guests.    The city was first painted pink to welcome a visit from His Royal Highness Albert Edward the Prince of Wales, who later became King Edward VII in 1876.

The ladies were certainly welcoming and smiled graciously as they each disembarked to greet us all with a cheery ‘Namaste’, palms pressed together as they gave us a little nod.

Excited to get going the group paired off, two people per rickshaw. Although rickshaws are a common means of getting around the city, these rickshaws are different. With the aim of reducing the impact of pollution, which is a huge problem in India’s cities, the Pink City rickshaws are electric, which makes the rickshaws noticeably quieter than their petrol-powered counterparts and provide a smoother ride.

First, we headed to the Hindu Govind Dev Ji Temple, the 18th century Vaishnava temple located inside the City Palace grounds. To reach the temple we must head through the old part of the city, the iconic terracotta pink buildings to which the city lends its name lined the streets and are a stark contrast to the newer parts of this large growing city.  It’s easy to see why the old area, the ‘Pink City of Jaipur’ was named a UNESCO world heritage site.

The rickshaws are a novel and welcome way to get around the city after our time spent on the bus. Our driver cruised through the narrow streets with ease as the city began waking up around us.  It’s the perfect time for a spot of people watching and to take in the sights and sounds of locals going about their early morning business. Even the cows were still lying down on the sides of the road before the day kicks off.

Our rickshaws squeezed through a narrow terracotta arch, competing with bicycles and pedestrians to get to the other side.  We emerge into an open area, passing parked motorbikes, other vehicles and some opportunistic fruit and coconut sellers stacking up wooden carts and park ourselves amongst it all. We set out on foot through two more old archways and come out the other side to the smell of marigolds and flowers, which is a nice surprise. On our left flower garlands being sold to the early morning worshippers on their way to the temple.

To our right, people were waiting in line to collect an offering that they place on the shrine inside the temple once they enter. The courtyard is busy, and bustling compared to the rest of the old city.

In what appeared to be chaos of people coming and going, everyone seems to walk with a purpose and as we follow along the wide passageway, a faint chanting drifted through the air and increased in volume with each step.

The Govind Dev Ji Temple is dedicated to Lord Krishna and attracts worshippers each morning who make offerings before heading out to work. The shrine is proudly centred in the middle of an open-air room, packed with people singing and chanting in unison. Closest to the shrine, people enter from the right-hand side, passing in front of Lord Krishna’s statue to lay down their offering, then continuing around the back of the icon and out again. From our position at the back of the temple, our eyes simply followed what appears to be the fluid movement of bobbing heads going full circle around the effigy.

Even the people standing further back were nothing short of enthusiastic as they sing together, raising their hands in the air and moving side to side, like a crowd at a music festival.  The energy was infectious, and it was frustrating that we didn’t know the words to join in ourselves.

Although we wished we could stay longer, we had to head to our next stop. Following our guide, we filed out back to the market area where some of our party took the opportunity to buy some coloured powder ahead of Holi Festival in a couple of days. Every market was selling bags of this brightly coloured powder that would soon be thrown at street parties and parades. You could sense the anticipation of the upcoming joviality in the air.

After weaving through the increased traffic, we finally pulled over to our next stop which at first glance appeared to be a rather uninteresting street. Our driver disappeared for a second and returned with a beautiful flower garland which she placed around my neck and then one for my co-traveller.

With the group together again, we gathered to cross the street and turned into an open courtyard area. The smell of flowers hit us, and colourful sight tells us we’ve arrived at the local flower market.  An unknowing passer-by would be wholly unaware of this market just a couple of streets over.

Walking around we see buyers filling huge bags with marigold heads used to make garlands like the ones we are wearing. Some people buy flowers for a morning offering, others are being prepared for a wedding.

Flowers hold a lot of significance in Indian culture, they are a symbol of strength, purity and generosity. Many Hindus’ start their day by offering flowers to their goddesses and the lotus flower, found depicted in lots of Indian architecture, is sacred in the culture. Buying flowers daily is not uncommon and these markets are an integral part of daily life.

Driving on we make our way to the Palace of Winds, known as Hawa Mahal in Hindi, constructed as part of the women’s section of the enormous City Palace in the centre of Jaipur. The intricately screened porch is in fact a facade and only one room deep in most places.  Constructed for the royal ladies to watch the outside world but remain hidden from public gaze.

Navigating through more traffic, we stopped at a tiny food stall on the side of the road for a refreshing cup of masala chai. The women employed by the Pink City Rickshaw Company have a limited level of English, but our guide explains that they are all from surrounding areas of Jaipur, many of them widowed with children to support and were working on a low income jobs before joining the Pink City Rickshaw Company.

The initiative aims to empower local women, break the stereotype of a woman's role in India and provide them with the chance to develop a career and even gain shares in the company.  They are taught basic English and although this is not an in-depth tour of Jaipur, we’ve been given a unique glimpse into daily life and a chance to step behind the scenes of one of India's most beautiful cities and soak up the surroundings away from the typical tourist crowds. I genuinely feel like I understand this beguiling place just a little bit better. 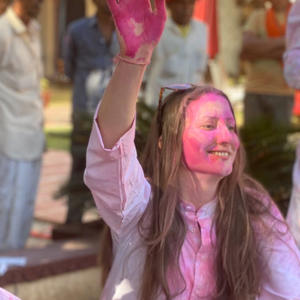