Behind the Scenes in Bollywood

Today I was taken behind the scenes into India’s glitziest industry – Bollywood.

The Indian movie industry dates as far back as 1913, when the first silent feature film, Raja Harishchandra, was made. By the 1930s sound film was being produced and over 200 films a year were being released, a number which is now closer to 2000 across the country.

Combining Mumbai’s old name - Bombay, with Hollywood, Bollywood is often associated with the whole of India’s film industry, however, it’s primarily the centre for Hindi cinema and many other films are made throughout the country in a number of different languages.

As we drive through the ‘’Bollywood Hills’’, my guide Nandita explains that there are two types of film in Bollywood.

‘’You have the masala films and the classy films. Masala films are the big blockbusters which combine everything in one film - drama, action, romance, comedy, like a true mixture of spices, a real escapism film for the public. Then the classy films tend to have more of a social message, are more serious and usually use lesser-known actors.”

Today we are visiting one of the main hubs for film and TV production in Bollywood located in the heart of Mumbai. On arrival at the studios, I’m welcomed on set where cast and crew are working away to get those crucial shots in before the end of the day.

Hiring studio space is not cheap, Nandita tells me, and they’re still waiting for some of the big stars to turn up but, as usual, they are stuck in Mumbai traffic.

The studio is made up of numerous sets, both indoors and outdoors, many of which I’m told are used in famous shows currently airing on TV.

Nandita tells me about her years as a Bollywood actress, when she would work 16-hour days, sometimes even longer, trying to fulfil that dream of becoming an A-lister. “In the end, I couldn’t balance work and family life,” she explained, “And there was a lot of waiting around.”

After viewing the different sets we wander past makeup studios and costumes designers, where we find people hard at work making last minute adjustments. From here I’m taken up to the mini-museum where I’m offered the chance to try on some of the costumes, which I of course accepted!

Following this, I’m led into a small room where there’s a very smiley young man waiting for me. Tammy is a professional dancer, and although he’s only 25 he has been training as a dancer since he was a child.

Now working alongside other dancers and actors, he choreographs many different stories and is here today to teach me Bhangra, a traditional folk-dance originating from Punjab.

From beginner to professional in minutes, I’m half expecting an invite to be in the next film shoot today, but sadly have to move on to the sound studio, where I’m given a brief introduction to the intricacies of dubbing and sound editing, a process which takes far longer than the shoot itself, up to 8 months in some cases.

For those interested here you can record one of your favourite songs in the actual studio and have a copy sent to you, however on this occasion I feel this sound editor is not being paid enough to sit through my recording.

To finish up I am then shown a short film on the history of Bollywood and how it has progressed over the past 100 years, an interesting overview that perfectly sums up what I’ve experienced today.

Sadly, my tour is over before the stars turn up, however, I get the impression I’ve seen far more than I would have if they were here, being able to see the crew more relaxed and being able to access more areas in between shoots. Overall an incredibly special insight into one of India’s most important and fascinating industries. 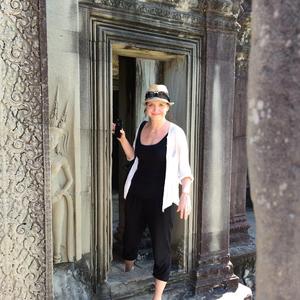