Local resident, Riya Sarkar shares with us her insider secrets of how to navigate the frenetic city of old Delhi. Whether you're a first-timer or a frequent visitor, there's nothing like the recommendations of a native Delhiite.

Old Delhi, originally known as Shahjahanabad, was built in the 17th century by the fifth Mughal emperor Shah Jahan, shortly after he ordered the building of the Taj Mahal in Agra. Although sacked and looted by various invaders and parts of it abandoned multiple times in the course of its history, the walled city has been continually inhabited for a little less than four centuries.

Carrying forward the artistic legacy of the Mughals in its heritage buildings and home to communities which still practice their ancestral professions, it also boasts the thriving markets of Chandni Chowk. Here we present the guide to this multifarious city.

With one of India’s finest mosques, Asia’s largest wholesale markets of spices and wedding essentials and the remains of a Mughal fort to stroll around in, old Delhi is a rich city full of unexpected delights.

Navigate the mesh of narrow, winding streets to discover hidden doorways, mansions (Havelis) or ornate Jain temples, sample some succulent kebabs at Karim’s, buy oil-based perfumes from the Mughal tradition or sit on the steps of the Rang Mahal or the pleasure pavilion of Shah Jahan reading a book in the winter sun.

Try the bedmi puri (a kind of deep-fried bread) with carrot pickle and Nagori halwa (a sweet dish made with semolina) at one of the many joints at Shyam sweets close to the Chawri Bazaar metro station.

Meat lovers usually head to Al Jawahar’s or Karim’s for badam-pasanda (a sumptuous meat preparation in cashewnut gravy), chicken Jahangiri or mutton burra kebabs or to Moti Mahal where butter chicken was claimed to have been invented.

For the more adventurous, head deeper into the thick of old Delhi to Haji Shabrati Nihariwala’s for nihari (slow cooked meat in a rich gravy) with tandoori roti, sheermal or naan fresh from the baker’s oven. Any excursion to old Delhi would be incomplete without a saffron-infused mango lassi at Amritsari lassiwala next to Fatehpuri Masjid.

The principal avenue of the city leads straight into the Red Fort through the mighty Lahore gate, at which the Indian prime minister hoists the national flag every year on the 26th of January, the Indian Republic Day. Among the surviving monuments inside the walls are the Naubat Khana (drum house), the hall of the audience, Shah Jahan’s pleasure pavilion and his private chamber. One of the British colonial buildings erected in the fort has been converted into a museum on the Uprising.

Built on a slight hillock, the Jama Masjid commands some of the best views over the city. Its delicate marble canopies and the prayer hall with exceptional pietra dura work on its facades make for a fine setting to observe the city.

Some of the last surviving and incredibly intact havelis (courtyard houses) with a splendid Jain temple within the cluster.

‘Ghalib, it was not by your wish that you attained this rank/ poetry came itself and asked if it might be your craft’.

One of the most celebrated poets of the city was Mirza Ghalib, employed in the court of the last Mughal. A part of Ghalib’s house today has been converted into a museum dedicated to the great Urdu bard, displaying his verses in his own hand and other fascinating artefacts like his wardrobe and embellished brass sheesha.

Light and Sound Show at the Red Fort

Haveli Dharampura serves not just dinner but an entire experience- replete with lush Galaouti kebabs and Kathak performances among fountains and marigolds.

Haveli Dharampura has chic suites for the luxury traveller, Maiden’s in Civil lines is a heritage property a little further north of the city where Edwin Lutyens stayed while he was designing the British capital.

Check Out Our India Tours & Holidays 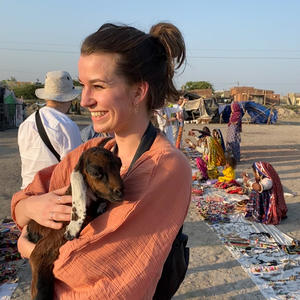