Visiting Algiers and the Sahara

Any visitor to Algiers is at first assaulted by the senses: pungent fish smells from the seafood restaurants by the port and the sights and sounds of the bustling casbah. The city's difficult recent history hidden by time, although glimpses of it can be seen from the deliberately non-descript doors along quiet streets that were once used by local fighters waging war to free Algeria from French rule. After a campaign of bombs and terror throughout the 1950s, Algerian independence was achieved in 1962.

Independence may have been achieved but Algiers still has the feel of Nice or Lyon: grandiose fin-de-siecle apartment blocks line the hot boulevards, choked by rush hour traffic. The French language is heard everywhere and most road signs are still in French, yet it still retains a distinctly North African feel.

We experienced a microcosm of this cultural fusion on our city walk where we encountered a strangely shorn and orange-dyed ram led proudly by its owner, we later found out that it was a prize-fighting ram. After this strange sighting, we stop for coffee and crêpes at a street cafe under the Ottoman-style post office.

Weary feet then send us deep underground to the sparklingly clean metro, which costs about 25p a journey and is spacious and uncrowded. A few stops and we make it back to our hotel, also typically French in style from its ornate facade to its tiny, out-of-action lift.

What to see in Algiers? Well I wouldn’t miss the monument to the martyrs, high above the city: it affords wonderful panoramic views of the Bay of Algiers and is a moving testament to those who struggled to gain independence from France. The Musee de Beaux Arts has a superb collection of French impressionists, many of whom visited Algeria, as well as more recent Algerian painters and sculptors. The Musee de Bardo houses a collection of African musical instruments as well as prehistoric exhibits in an evocative Ottoman palace. But for me, just promenading the sunny streets and interacting with the locals who often call out “Bienvenues a Algeria!” makes me happy to be here.

And onto the Sahara...

I love the desert. Landing in the photogenic town of Timimoun the dry heat greets me and I feel at home. Blue skies and yellow ochre vistas beckon our group into the Grand Erg Oriental, part of the vast area of the Sahara within Algeria. The inhabitants of Timimoun are Tuaregs, rumoured to be descendents of the Berber peoples of North Africa, and were traditionally a nomadic group. Famed for their bright clothing, some of the women wear lace masks over their mouths and noses, while the men are turbaned in blue lengths of material typical of the Tuaregs.

Next we visit the market. It’s for locals, not tourists but we buy succulent dates and watch a sword-maker at work. There are brightly dyed goatskins, freshly tanned and ready to be worked into pointed slippers, purses and bags. All the while we are surrounded by buildings are red ochre mud except the Marabou, the home of the religious man who distributes learning and alms, which is white with wooden logs jutting out like prickles on a hedgehog, standing out among the browns, ochres and reds.

During our visit to the Grand Erg we make time to visit ochre caves, ancient mud citadels and what little reminders there are the once great expanse of water that covered much of the area, now evaporated to salt that looks like frost on top of the red sand. Our local Tuareg guide explains the ancient fougara irrigation system and painstakingly prepares local tea for us over a fire, as the group sits back and reflects on all they've seen.

Onwards we drive through the desert and head to the oasis town of Tagrit, singled out by the Algerian Government for development as a tourist destination but we seem to be the only non-Algerians in town, as we shop for fruit in the market and climb the vast dunes just behind our guesthouse, which is part of an ancient Ksar, or citadel, and richly coloured with Berber rugs on the ochre mud floors. We shelter from the midday sun under a Berber tent on a terrace overlooking the endless sands. It’s a magical place and we are reluctant to leave... 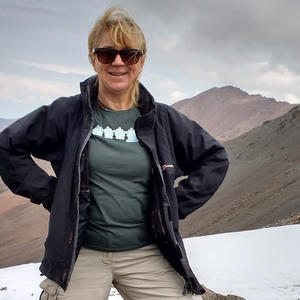