The first things that comes into people's minds when thinking about Japan are samurai, geisha, futuristic technology and beautifully manicured gardens. However, I knew there was a much more rugged side to Japan and in true Wild Frontiers style I was desperate to experience the unseen side of this amazing country.

After researching various routes I settled on the Kumano Kodo Trail (one of only two pilgrimage routes to hold UNESCO status), an ancient pilgrimage route that Emperors of Japan, and their followers, walked in order to visit the three most famous shrines in this region of Japan. The Emperor's Trail offers walkers the chance to experience traditional Japanese inns (minshukan) and see traditional Japan but with far fewer tourist than other more well-known areas.

The Kumano Kodo is a self-guided trek, but I came armed with some old fashioned maps and a trekking guide, so I set off with only a little bit of trepidation. During the next three days of trekking, I only met one other couple who were trekking the trail, they cleverly were equipped with a bell on their bags in order to warn the local wildlife, bears in particular, that they were moving through the countryside. Left wondering why I did not have a bear bell and slightly curious whether it would be a deterrent or more like a dinner summoning, lost in this train of thought I nearly stepped on a snake. This was undoubtedly the fastest my heart raced on the entire trek even though some of the climbs are quite steep.

Walking through Japan's old pine forests was lovely and at points I felt like I had stepped back in time, as there were only trees as far as the eye could see. The hills in the area were often covered in a lovely rolling mist and some of the viewpoints were incredibly dramatic. The trail has various shrines and Torii gates, the main shrines at the end of the trek are particularly special and make the whole trail even more rewarding.

The accommodation was very traditional, usually homestays with amazing views, cold beers and the traditional Onsen (bathhouses) that eases the aching joints after a day's walking.

The experience of trekking the Kumano Kodo is something that will stay with me for a very long time and there are other areas of Japan that I would also love to explore. Bear in mind that you can vary the length of trekking time and I would reccommend visiting in either the Spring or Autmun in order to avoid the heat.

The final day of trekking takes you through a lovely village, then down to an amazing shrine after that you can take the bus to a nearby river that offers you the chance to bath and think over an amazing experience. 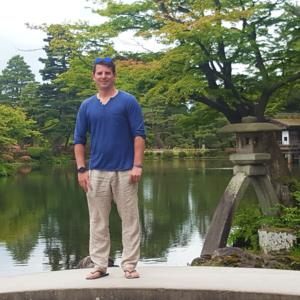