WF traveller Andrew Simmonds recently travelled on our group tour to the Danakil Depression. Below he talks about his impression of this fascinating destination.

After visiting Ethiopia in April, I was looking for another trip to do before the year ended and, due to work commitments, I ended up booking on the Danakil Depression trip. Dario, our WF tour leader in Ethiopia, had also recommended the trip to me. I did get lightly worried after I booked when a couple of Wild Frontiers employees said “that’s a tough trip”.

It is absolutely fantastic and you are seeing nature at its most spectacular. However, it's not the easiest trip and it is undertaken in some of the most inhospitable conditions, but it's thoroughly worthwhile.

After a quick tour of Addis seeing the cathedral, market and “Lucy”, we embarked on three days of driving north in our 4WD, marvelling at the rural Ethiopian scenery which starts within 30 minutes of leaving central Addis. We stopped at various markets on the way. In the markets you could buy everything from the normal food and spices, mats, second-hand and new clothes, many plastic goods and of course camels, goats and bulls/cows of various sizes. Large sums of money were changing hands for these animals. The main issue was to avoid being impaled on the rather large horns.

Eventually arriving at Lake Afrera, the first thing we noticed was the large scale salt extraction works which we walked through the next morning, watching the lorries being loaded with large bags of salt. A dip in Lake Afrera and the hot spring is a welcome break from the 4WDs.

Excitement was building as our next stop was Erta Ale Volcano. We needed to stop at Kuswarad, a village in the middle of nowhere – how the people survive here is amazing. Driving towards the camp we passed another settlement built on the lava fields. The children waved as we went past; it was heart-wrenching to see how poor and undernourished the children looked. One of the poorest places I have seen in Ethiopia.

Arriving at the foot of the volcano a rest and lunch ensued, before commencing our walk as the sun was setting. As it got dark the glow of the volcano could be seen ahead and our walk to the top was fast as we were all very eager to get there. We were not disappointed; words are difficult to describe the lava lake. The heat and rhythm of the erupting lava is mesmerising. You can stand for hours just watching the lava from the centre of the earth erupting out into the lake, hopefully not suffocating from the noxious gases.

After a few hours’ sleep we ventured back down to the lava lake in daylight, when you could really appreciate the size of the lake and surrounding lava fields. The lava lake put on a more exciting show for us than the previous evening.  We rested during the heat of the day and made another visit as dusk arrived – the lava lake was truly spectacular with some quite massive eruptions coming from the centre of the lake. The worst part was having to leave as the walk back down to the camp was a bit of a drudge in the dark.

The following day we drove across the desert, crossing various river beds and passing remote settlements until we arrived at Ahmedela with the welcome of a lukewarm beer. Ahmedela is not a pretty settlement; accommodation is basic, it is hot and dusty and the ground is baked hard. Sleeping out under the stars was the main pleasure.

The next day we visited Dallol and saw nature in its raw state. Walking around the sulphur pools with their dramatic and blinding colours was remarkable. Ending up at the salt flats we saw the work of breaking up the salt into slabs for loading onto camels and donkeys for that evening’s camel/donkey train. The work is truly back-breaking, not helped by the heat and the thought that they walk to work from Ahmedela every day. You get hot just standing there without working and this is the cool time of the year. In the evening ice cold beer was available, following a drive and quick walk to the local military camp. This was most welcome as there is only so much warm water you can drink.

Overall, it was a fantastic trip led by an excellent tour leader and, although not one of Wild Frontiers' trips staying in nice hotels, the trip can be thoroughly recommended for its visit to one of the world’s natural highlights; a truly spectacular phenomenon.

For further details, take a look at our Hara and the Danakil Depression group tour.

Check Out Our Ethiopia Holidays & Tours 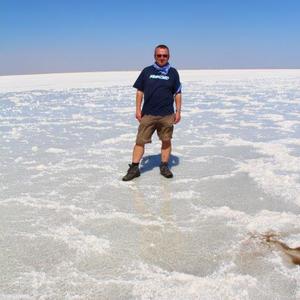