Last Octobers Lost City of Arabia tour to Jordan was an extra special trip for Nigel and Ali Poole... they were on a hunt for a lion.

The wrong destination, you may think, to be looking for such an animal but this was no safari, they were in fact looking for a particular lion carving somewhere hidden within the rocks that a previous family member once stood by many years ago.

Ali’s grandfather, Dr Hugh James Orr-Ewing, became a medical missionary in 1920 and for 12 years was based at the English Mission hospital in Jerusalem. It was here that he journeyed to Petra and asked if on his travels he could find and photograph a large lion after a copy previously photographed before the war was lost, much like the city of Petra once way itself. It was this paper and photograph that Ali’s grandfather had written with the title, ‘The Lion and the Cavern of Bones at Petra’ that the Poole’s had stumbled across shortly before their departure and in light of their forthcoming trip to Jordan, they felt it only fitting to find the lion once again.

In order to find the lion in question, this would first take us through the ‘secret path’ to Petra. Starting quite literally off-the-beaten-track after passing Petra’s entrance, this route took us over the top of the surrounding rock formations, passing old abandoned caves that once had a use to a passing tradesman.

Eventually we arrived at the ‘high place of sacrifice’ where we stopped to take in the incredible views and take in a different perspective to the main sights of Petra below. How small the people, camels and donkeys looked along the trails now, giving us an insight into how the city probably once looked back in its more grand, bustling heyday, where these could have been locals and travellers from neighbouring countries coming to trade their goods after a long journey.

Continuing our quest to find the famous lion came to a successful end when there in all its glory, the carving we had been in anticipation to find. Situated at the bottom of some steps, before the end of the secret route brought us back into the main centre of Petra, was the lion. Now called ‘The Lion Fountain’, the Nabatean carving supposedly once had water flowing from its open mouth, where a channel above received water from a nearby spring. Today, our imaginations help us to visualise what this magnificent lion would have once looked like, but we are still lucky enough to make out its distinct frame.

Not only was this a fantastic triumph for Ali and Nigel to discover but it got the whole group elated to have shared in a quest that had become such a talking point for the majority of the trip amongst us all.

In the footsteps of Indiana Jones, and indeed, the very man who rediscovered the lost city of Petra after it had not been seen by western eyes for hundreds of years prior, we got to relish in the thrill of our own little treasure hunt.

Check Out Our Jordan Tours Here 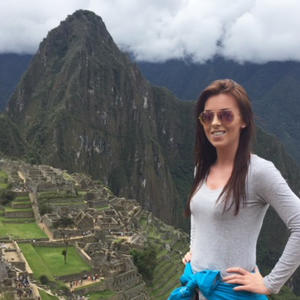